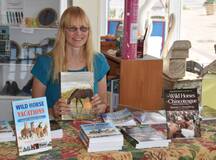 How we started
Bonnie U. Gruenberg founded her first publishing business, Birth Guru Publications, in  2008. Before becoming an independent publisher, she had authored two books and published them with mainstream publishers (Essentials of Pre-hospital Maternity Care 2005 by Prentice Hall /Brady and Hoofprints in the Sand 2002 by Eclipse Press).  Eager to gain control over the layout, content, and marketing of her books, she decided to start an independent press that specializes in her two favorite subjects- obstetrics and horses.

In 2008, Birth Guru, subsequently renamed Birth Muse Press,released Birth Emergency Skills Training®. “B.E.S.T”, written and illustrated by Bonnie Gruenberg, keeps out-of-hospital midwives current in skills necessary to manage emergencies. We were  so excited when it won three awards and was a finalist for two others. Birth Emergency Skills Training ® is featured on the North American Registry of Midwives (NARM) written exam reference list for the Certified Professional Midwife. It has been translated into Russian and became a dynamic and innovative live workshop .In 2011 it was translated into Russian. In 2008, BEST was taught as an interactive online course. Later, Andrea Dixon, CNM, CPM, transformed it into a dynamic hands-on workshopwww.birthemergency.com.
​
In 2014, we reorganized the business and created Synclitic Media LLC, which is the parent company for three imprints. Synclitic Press publishes women’s health and obstetric titles, including BEST materials. Quagga Press publishes equine media, with an emphasis on the free-roaming herds of the Atlantic coast.

In 2015, Quagga Press released The Wild Horse Dilemma, Conflicts and Controversies of the Atlantic Coast herds. Not only did it garner great praise and excellent reviews, it won a number of awards within a few months of release.  We have a number of exciting books in the works. Check in frequently and see what is new!